The Pendulum: A Granddaughter's Search for Her Family's Forbidden Nazi Past 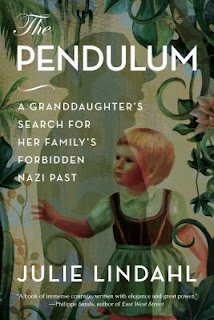 The Pendulum is a personally recounted story of a historian's search for the truth about her family's history during and after WWII.  She was born in Brazil where her grandparents had emigrated after the war. The family history was forbidden or glossed over or simply reinvented.  She decided as an adult to confront the ghosts of the past in order to try and understand her family and herself more fully.

Author Julie Lindahl is a storyteller and historian and does a meticulous job of describing and documenting her journey to unearth her grandparents' personal involvement in the war as enthusiastic National Socialist German Workers' Party members (i.e., Nazis).  As a former Fulbright scholar and graduate of Oxford University, she's a well trained academic with impressive credentials, but what struck me about this book was not the academic precision, but the basic humanity.  All families have 'skeletons' lying buried.  There are always things which are no-go zones, whether it's a distant relative's drinking problems or their great-great-grandmother's transportation to Australia. Few of those skeletons leave such long shadows as the ones resonating down to the present day from the second world war, at least in the west.

I personally grew up in a family where questions about WWII weren't really allowed (or at least emphatically not encouraged) and it wasn't until I was an adult that I really understood that my paternal grandfather's entire family perished and that he was the only survivor.  The trauma and survivor's guilt left him with lifelong depression which also colored my father's childhood and upbringing.  Despite the problems, he was my grandfather and I adored him.  I can very easily understand the same dichotomy Ms. Lindahl describes in her book.  How do you even begin to try to reconcile the person you knew as a loving family member with the history which you objectively know to have happened?

I look around at the political climate and the horribly unthinkable things which are happening in the full light of day today, which would simply not have happened even ten years ago and I shiver.  There have been wounds festering for the better part of eighty years which really should have been acknowledged and dealt with long ago.  There's a metastasis occurring now, today, in many places in the USA and Europe and if we don't do something, we're destined to go down the same road.  It's absolutely chilling.

Anyhow, this book is very well written.  It doesn't provide much that will thrill actual historians, it's not a history book.  It's emphatically not dry or academic.  It's more of a journal.  It's not a long book, 256 pages, and I devoured it in a couple of sittings.  There is an interestingly eclectic further suggested reading list appended to the end of the book, many of which were previously unknown to me.

This would make a really superlative group or bookclub read.

Disclosure: I received an ARC at no cost from the author/publisher for review purposes
at August 04, 2018