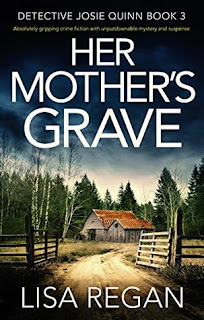 Her Mother's Grave is the third book in the Detective Josie Quinn series by Lisa Regan.  Published by Bookouture, and released 19th July, 2018, it's 346 pages and available in ebook, paperback, and audiobook formats.

This is a graphically brutal novel.  Every possible trigger warning is appropriate; there's explicit psychological torture and abuse, drug abuse, sexual abuse, trauma, sexual abuse of a child, etc.  I read this book as a standalone, and wondered (no spoiler warning) if the book might actually be using the unreliable narrator trope (it isn't).  I was sort of impressed wondering about that since it's the third book in the series using this main character.

All that being said, it wasn't an easy book to read, though it is a well written book.  I do like police procedurals and mysteries especially with ensemble casts and I'm more than willing to stick with an author for a long while in a series until they find their footing.  The plotting in this particular entry is taut and suspensful, it just felt like slow torture to read about all the horrible things which happened to main character Josie as a child and as an adult.  It was (for my taste) just over the top.

I do know there are huge numbers of fans of procedurals/thrillers who really love nonstop action and suspense.  The ratings for this book and others in the series are proof of that.  I will add that the language is quite brutal throughout with a fair bit of strong cursing, so for readers for whom that's problematic, it's something to be aware of going into the book.

I will stick around to see how the characters develop, though the violence may cause me to bail on the series eventually.

Disclosure: I received an ARC at no cost from the author/publisher for review purposes
at August 06, 2018