Song of a Captive Bird 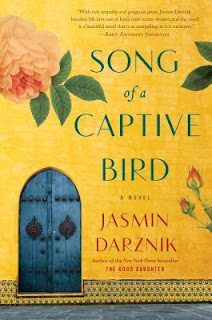 Song of a Captive Bird is a fictionalized historical account based on the life of Iranian poet Forough Farrokhzad. Written by Jasmin Darkznik, released 13th February, 2018 by Random House Ballantine, it's 401 pages and available in all formats.
Though it is a fictionalized account, the author has clearly done exhaustive and meticulous research.  The narrative is seamless and engaged me from the beginning.   This was a really difficult book for me to read.  As a westerner growing up in the 70s-80s, I was never directly confronted by the overwhelming sexism and casual cruelty experienced as a daily part of life of women in Iran in the early part of the 20th century.

Forough was an outspoken poet and activist during a time and place when women simply weren't given the option to be anything other than wives and mothers.  Much of the narrative of this book centers on her childhood to young adulthood and her chafing anger at the harsh realities for women in pre-revolutionary Iran. I've read much of Farrokhzad's poetry after reading this book and it astounded me how razor sharp and strong and desperately sad much of it is even after 50+ years.

She was a fascinatingly complex, flawed, strong soul and Jasmin Darznik does credit to her life.  This is not a book I will forget in a hurry.