The Book of Secrets (The Last Oracle #1) 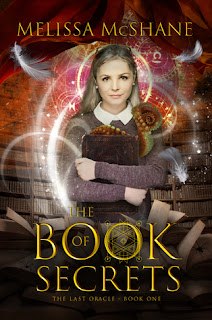 The Book of Secrets is the first book in a new series by Melissa McShane.  Though the author's more widely known as a historical fantasy writer, this new series is a departure, since it's more of a light urban fantasy with cozy mystery. The protagonist is a hapless 21 year old who lands a job at an antiquarian bookshop and is thrust into an unknown world when her boss gets murdered whilst she's on the premises and she begins to find out that the bookstore is emphatically not your average bookstore.

I especially enjoyed the characters in the book as well as Helena, the main protagonist's, relationship with her best friend Viv.  She also has a great relationship with her family! How refreshing to meet a protagonist in a NA book who isn't broken and emotionally destroyed. The entire book is full of quirky characters and the author does a good job of making them real in all their weird and funky glory.  There's a foreshadowed slow burn romance interest, but the author doesn't just fling them together on page 12 (kudos for that!). There's the obligatory female love-to-hate character.  I don't think I've read a NA novel in ages that had a female protagonist that didn't use the sarky female-female antagonist device.  It's de rigueur.  That small quibble aside, the book is fun and well paced and plotted.  The oogie space monsters from another dimension are satisfyingly oogie and scary (though happily not wet-your-pants-and-throw-the-book-across-the-room horrifying!).

The mystery part has a satisfying and well paced denouement in the last chapter.  All around a fun read.  Looking forward to the next book(s) in the series.

Disclosure: I received an ARC at no cost from the author/publisher for review purposes.
at June 03, 2018