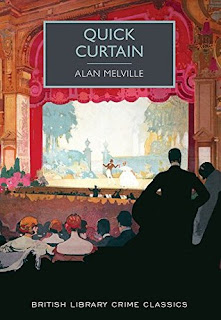 Quick Curtain is another 'forgotten' gem, re-formatted and released by Poisoned Pen press in the British Library Crime Classics series with a release date 5th December, 2017. It was written by Alan Melville and originally published in 1934.  There's a lighthearted element to the humor (for which the author was taken to task by Dorothy Sayers).  I enjoy so many of the classic golden age mystery writers and find the interwar stories especially engaging and nostalgic, seen through the lens of modern times. This edition features a really interesting introduction and short history by Martin Edwards which adds a lot of background for the narrative.

This is a very light mystery and intended as a fun diversion, not a deep or philosophical examination of the criminal mind.  The plot is unusually full of twists and turns and I really enjoyed the interplay between inspector Wilson and his son, Derek, a reporter.  They seem to genuinely like one another and their banter adds a lot to the dialogue.
There is a fair bit of authorial intrusion (the author speaking directly to the reader), which may annoy some readers, but I found it teasing and quite fun.  The author uses the device relatively sparingly, so it's not overly tiresome.
This is not a procedural in the normal sense.  The goings-on included in the book aren't realistic, nor are they intended to be realistic.  Realism was intentionally sacrificed for entertainment value.

Incidentally, I really thought I had it figured out until quite literally the penultimate page! Well played, Mr. Melville, well played.

268 pages, available in ebook, paperback and audiobook versions. Worthwhile.  In fact, I've enjoyed all the books I've read in the Crime Classics collection.

Four and a half stars.  Lighthearted, witty, and entertaining.