The Woman in the Water 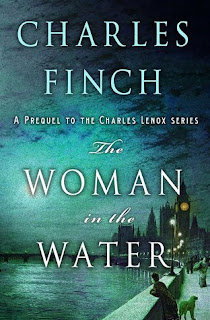 Part of the reason I really like series is that I get to see the development of the recurring characters.  Especially with mysteries (which are my favorite genre), the continuity and the characters' development over time are very satisfying to me.

The Woman in the Water is a prequel to the Charles Lenox series by Charles Finch.  The entire series are classic mysteries.  This one is no exception.  I enjoyed reading about his family, his complex and bittersweet relationship with Lady Jane, as well as his early collaboration with Graham.  There was precisely the right amount of humor (Mrs. Huggins, his housekeeper for example) to balance the murders and investigation.

Period mysteries (especially those set in Victorian England) seem to have become something of a flavor-of-the-moment, so it's unusual for one to stand out amongst the flood of offerings.  This series is genuinely well written and entertaining.  Relatively clean mysteries, without a lot of overt blood or violence.    There is occasional light cursing (never gratuitous) with a few scattered 'hell, damn, blast and/or bloody'.  There's nothing which could conceivably shock or offend most readers.

Incidentally, though age is certainly not indicative of writing skill, I admit I was shocked to learn that the author, Charles Finch, is quite young (b. 1980).  He's a masterful writer, and I'm inordinately pleased at the likelihood of having new mysteries from him for decades to come.

The Woman in the Water was published by St. Martin's Press - Minotaur and was released 20th February, 2018.  Available in hardcover, softcover and ebook formats.

Five stars, top shelf mystery.  This one made me want to go and revisit the series.

Disclosure: I received an ARC at no cost from the author/publisher.
at May 09, 2018