Murder at Half Moon Gate (A Wrexford & Sloane Mystery #2) 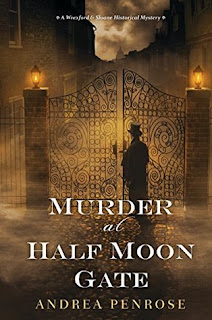 Murder at Half Moon Gate is the second mystery featuring Wrexford & Sloane. Written by Andrea Penrose, published by Kensington books, it was released 27 March, 2018.  This is a well written and researched Regency era mystery featuring an unlikely partnership between a nobleman and a widow who is secretly carrying on her late husband's career as a political satirist.

The mystery itself is well paced and plotted with fleshed out characters. There is a lot of chemistry built up between the two titular characters and I appreciated that the author resisted the impulse to just fling them together romantically.

I enjoyed reading this book, and have since gone back to read the first book in the series as well.  It would definitely appeal to fans of Kate Ross' Julian Kestrel, Barbara Hambly's Dr. Benjamin January (though he's American), or C.S. Ross' Sebastian St. Cyr. This series can stand shoulder to shoulder with those series quite well.

Disclosure: I received an ARC at no cost from the author/publisher for review purposes.
at May 27, 2018