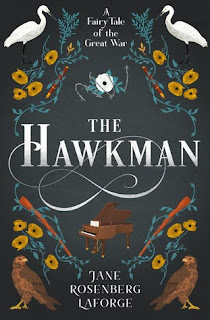 The Hawkman by Jane Rosenberg LaForge is an original and powerfully written reworking of the Grimm's fairy tale Bearskin. The novel departs from the fairy tale in a lot of ways, and not having any prior knowledge of the earlier fable doesn't detract in any way from this novel.

The author is a poet and it shines through in the exquisite use of language.  Most of the prose in the book is transcendent and very 'painterly'.  It's a fantasy, but grounded in reality.  I wouldn't call it magical realism, exactly (with the exception of one passage, which seemed written to indicate that it was metaphorical, not literal).

The book is beautifully written and poignant.  I haven't often been touched as deeply or felt as attached as I did to the characters in The Hawkman.  It's a book about the casualties (both literal and figurative) of the first world war, so much of the book was brutal and sad.  I found the redemptive themes of love and kindness and humanity had even more impact when presented in contrast.  It's been several weeks since I finished reading the book and I still find myself thinking about it often.

Due out 5th June, 2018 from Amberjack publishing.  280 pages in paperback and ebook formats.

Disclosure: I received an  electronic-ARC at no cost from the author/publisher.