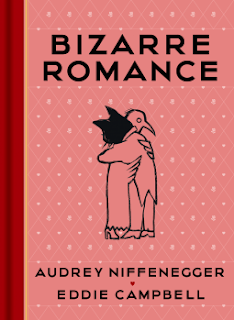 Audrey Niffenegger and Eddie Campbell team up in a really eclectic collection of graphic stories. Some of these were published before in other non-graphic formats, but all are oddly engaging.
There were several really standout stories included here.

The leading story, Thursdays, Six to Eight p.m. is sublime.  It combines shades of Bluebeard with modern neuroses and is humorous in a wonky way.  Most of these stories are somewhat off-kilter and unexpected.

The Composite Boyfriend is a sharply funny commentary on gender bias and objectification and expectations.  The first couple of pages are set up like old-fashioned paper dolls.  There are several outfits, genitalia, accessories, shoes etc from which to choose.  The prose which follows is written in a sort of 'choose your own adventure' format with several alternatives to each sentence.  The ending (though expected) delivers a nice payoff.

There are 13 vignettes included and all of them are strong; a few are sublime.

I came to the party familiar with both of the creators, but had no idea they were a real life partnership.  It works very very well and the book really resonates with both personalities and two completely different creativities.   There's a cool synergy at work here and I enjoyed it very much.