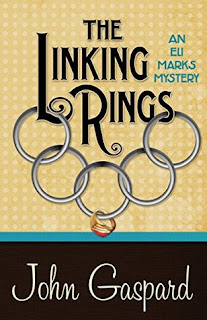 The Linking Rings is the 4th Eli Marks mystery by John Gaspard.  I read it as a standalone and it worked very well.  I intend to chase down the first three books in the series.

The 'hook' for the series is that the main characters are, and the action happens around, magicians and their performances.  The main character, Eli, is a performer and co-owns a magic store with his famous uncle Harry, also a magician.  Harry and Eli are off to London for a special set of performances at a famous magic venue, The Magic Circle.  The performance schedule is upended when one of Uncle Harry's former cronies, Oskar, is literally stabbed in the back by a chair prop on their first night.

This is a traditional whodunnit.  The characters are maybe a bit standard (the bumbler, the femme fatale, the lush, the womanizer, etc), but they're pretty well written and the book is a fun read. The dialogue is well written and the foreshadowing and clues are presented creatively and relatively subtly. One thing I really enjoyed a lot about this book was the humor.  The main characters definitely don't take themselves too seriously and the dialogue is often sparkling and witty. I really liked the repartee and patter between Roy and his wife, Roxanne; they seemed to genuinely like one another (at least under the surface).

This is a clean mystery and the murders (though one of them is fairly horrific) are all written tamely and without graphic descriptions.  The dialogue is also clean and except for an occasional 'hell' or 'damn' has nothing which will dismay readers.

I enjoyed it very much and recommend it to lovers of classic amateur sleuth fiction.  One small caveat, the author writes at a couple of different points in the book that Eli's uncle Harry is being held because murder is 'a capital crime' in the UK.  I thought at first that the book itself was set pre-1965 (the point at which capital punishment was abolished in Great Britain), but then the author talks about clearly modern landmarks like the London Eye. It's not a huge discrepancy and it doesn't have any overall effect on the plot, so it isn't going to be any sort of issue for the vast majority of readers.

I intend to find the first three books in the series, high praise from me.

Disclosure: I received an ARC at no cost from the author/publisher.
at January 20, 2018