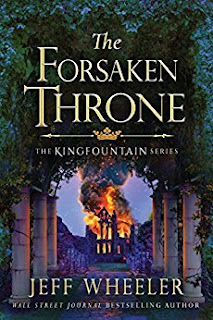 The Forsaken Throne is the 6th (final?) book in Jeff Wheeler's Kingfountain series. The series is an epic multi-book fantasy with some crossworld tie-ins from the author's other series.  There are several interconnected storylines, most of which are tied up in this, possibly final, installment.

I enjoyed reading this one a lot and seeing how the storyline would unfold and resolve, though, as other reviewers have mentioned, the pain that the heroine Trynne suffered seemed unending.  Lady of Sorrows, indeed.  Building a rapport with characters only to see them pushed and broken and betrayed over and over again felt wearying to me and I often took a pause for a few days.  This was not a read-in-one-sitting book for me.  I liked it very much that she was emphatically not a pampered soft and pliable princess.  She is honorable and, frankly, pretty badass.

By my rough reckoning, the main series includes well over 2000 pages; that's a lot of room to develop a world and characters.  The plotlines are in my opinion, certainly worthy of the epic scale of the books.  I never had problems keeping the characters straight in my head, though I wouldn't suggest this book as a standalone, especially to people who aren't die-hard epic fantasy fans.

Though I would certainly class this series as comfortably inside the fantasy genre, it's not the same sort of gritty massively epic fantasy of G.R.R. Martin or Joe Abercrombie, full of pitched battles and people disemboweling one another.  Never fear though, there's lots of evil magic vs. good magic, betrayal, sacrifice and dishonesty.  I liked the ending a lot, without spoiling anything.

Four stars for this installment and four for the series as a whole.  I'll be picking up his other books.

Disclosure: I received an ARC at no cost from the author/publisher.
at January 07, 2018