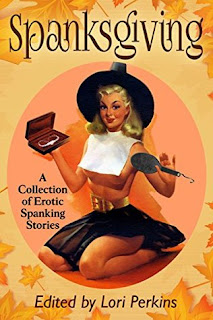 Spanksgiving is an anthology (164 pages), edited by Lori Perkins which includes 9 short stories with spanking.  As with most anthologies, the included stories are a mixed lot.  They're all consensual and M/F pairings with both men and women on the receiving end.

There are some continuing characters whose stories form bonus scenes from other works, such as a bonus scene from Bad Boy Alphas #1, and another short installment from Trinity’s Blacio's naughty stepbrothers series (bonus for folks who love shifter romance).

One of the reasons I really love anthologies is that there's always something that appeals to readers for further reading.  I found several of the included stories both appealing and sweetly spicy.

There were, however, a few places in the text where typos or grammar mistakes jerked me out of the story, for example a typo where 'you're' was substituted for 'your'.  I know I'm a nerd. This probably won't bug most readers.

Available in ebook and paperback formats from Riverdale Avenue Books and released 22 November, 2017.


Disclosure: I received an ARC at no cost from the author/publisher.