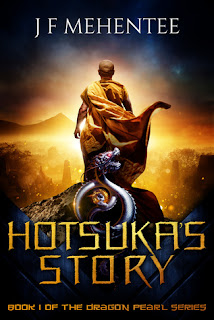 Hotsuka's Story is the first book of a 6 book series called The Dragon Pearls. This beautifully written narrative takes place in a world based on Eastern mythology with djinni, nagas, quarrelsome gods and goddesses and spirit beings (meijin, roughly equivalent to celestial angels). Meijin have hierarchies and different responsibilities, and Hotsuka's job was to travel all of existence and observe the creations and beings contained therein.  Hotsuka becomes infatuated with a human woman and the consummation of his infatuation and the subsequent child produced threaten to unbalance the entire universe.

The writing is truly deft and immaculately paced.  I was drawn along and never once felt myself dragged out of the story by an awkwardly written bit of dialogue or plotting.

According to goodreads and Amazon, this 6 book cycle is author J F Mehentee's first published work.  It's an impressive debut.  Further amazement ensued when I learned that all 6 books were self-published simultaneously 1st Nov, 2017 and promoted by Xpresso Book Tours on NetGalley.   Books aren't just written and they don't just spring into creation fully formed.  The author's credits in the afterword credit editor James Christy and copy editor Richard Shealy and I have to say that they did a stellar job.  I found not one single typo or formatting error and the structural and story arc editing were seamless and completely unobtrusive.

Kudos for the gorgeous cover also, by  Deranged Doctor Design. The cover is what first caught my eye, and I'm so glad it did.

Just a really wonderfully written book.  I intend to acquire the rest of them asap.

Email ThisBlogThis!Share to TwitterShare to FacebookShare to Pinterest
Labels: fantasy