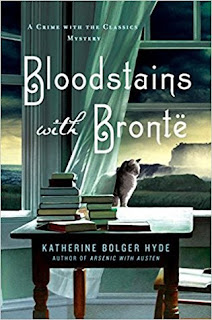 Bloodstains with Brontë is the second book in the Crime with the Classics series by author Katherine Bolger Hyde. Released 12th Dec, 2017 from St. Martin's Press (Macmillan) it's currently available in ebook, hardcover, and audio versions.

At almost 300 pages, it's a substantial size for a cozy mystery, but the author has a deft hand at plotting and it goes quickly.  This was my commute read to and from work, and I devoured it in a couple days.  The chapter headings are quotes from Bronte novels and I was impressed with the way they coordinated and preshadowed each chapter.

The characters are well written and mostly fleshed out.  I had some trouble with some of the dialogue, but in general there wasn't much clumsiness or being yanked out of the story by anything egregious.  It's basically a bed and breakfast cozy with a literature professor as the amateur sleuth. It's comfortable and clean (totally SafeForWork), very little mild cursing (a handful of hells, damns, and shits).  You know the deal going in, and it doesn't disappoint.  The clues are presented in the story and while most experienced readers will have worked out 'whodunnit' before the end of the book, there are a few unexpected twists along the way.

The book is written in third person omniscient PoV, but there are journal entries written by Katie (a young woman who works with, and is like a daughter to, the main character Emily).  The journal entries (in 1st person PoV) are italicized, but are placed without any segue, so they seem occasionally disjointed from the rest of the narrative.

There is a strong element of Christian faith and sensibility running through the novel, but nothing most readers would find very objectionable.  Emily is written as a person of faith and that affects the choices she makes and her reasoning processes in the book.  She has a different worldview than do I and as long as I remembered that, it wasn't a problem. She is a good person and tries very hard to live her life in accordance with her faith.

Much of the plot hinges on date rape and non-consent, so if that's a trigger, it's probably best to skip this one.   The author does a pretty good job of writing the necessary awful bits without being too graphic or glossing over the trauma entirely.

I read this second book as a standalone and it worked perfectly well.

Disclosure: I received an ARC at no cost from the author/publisher.
at January 25, 2018