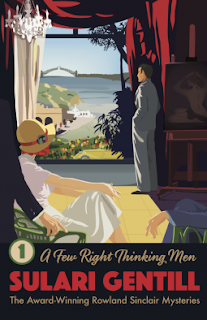 Originally published in 2010, this is a re-release by Pantera Press in paperback format. Written by Sulari Gentill and set in 1930s Australia, it's beautifully written and redolent of classic golden age detective fiction.

The series is written around real life history, with verifiable political and news stories of the time seamlessly interwoven into the narrative.  I have been most impressed with Ms. Gentill's ability to place her characters peripheral to real history and really allow the reader to feel like they're there.

This is the first book in the series and introduces the dashing (and charmingly egalitarian) Rowland Sinclair and an ensemble cast of friends and associates along with a beautifully drawn depression-era Australia.

Having read the series (and looking forward to new installments), one thing that has impressed me very much is the author's facility with a really well planned and executed story arc.  I can't imagine how many books ahead she had planned when writing the first book, but there are foreshadowings in this book which play out in book 8 in the series.  In addition, each book is complete in itself. Honestly, I read them out of order when I could find them, and never felt lost or cheated.  They're really well written enjoyable books.  The dialogue is pitch perfect, the characters and setting are stellar, the writing is great, and the plot adheres to the 10 commandments of detective fiction (the reader gets all the info to 'solve' the crime, no hidden perpetrators, no 'evil twins' etc etc).

Other reviewers have done a good job of describing the plot, so I've concentrated on the books as a series.  I did review book 8 on this blog here.  I've seen this series compared to Kerry Greenwood's Phryne Fisher books, but apart from the setting (depression era Australia), I don't see it.  Both series are fun, but while Phryne's sort of a fantasy cozy, the Sinclair books have a lot more in common with Ngaio Marsh than Kerry Greenwood.

Well written, solid from this, the first, book, beautifully plotted. 323 pages, but I never found my interest flagging. Well worth a read.

Four solid stars
Disclosure: I received an ARC at no cost from the author/publisher.