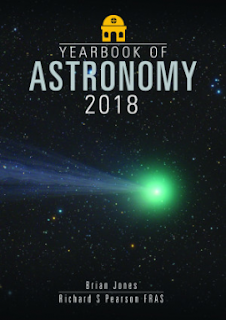 After the death of Sir Patrick Moore in 2012, The Yearbook of Astronomy was in danger of ceasing publication.  It had been published annually for more than 50 years and was saved by the timely intervention of dedicated astronomers and laypeople who were invested in securing publication going forward.

Happily, Pen and Sword, a UK publisher, along with Brian Jones and Richard Pearson, FRAS,  have picked up the mantle to carry this worthy yearly resource forward into the future to inspire and educate astronomy fans worldwide.

The book is a workhorse.  It's built on a no-nonsense, useful, and familiar format.  A forward and introduction are followed by recommendations for using and getting the most out of the book. The following star charts, which comprise roughly 15% of the content, are split into northern and southern hemisphere charts.

After the charts, there's a short section with dates and data for moon phases and eclipse info and best viewing areas.

The bulk of the yearbook (as in previous years) is taken up by the monthly sky notes and articles.  I really love that the 'meat' of these yearbooks are accessible and interesting to a broad range of users, from amateurs to academics.  It's a very inclusive, well (and entertainingly) written guide for everyone.

Following the monthly sky notes are the articles whose author list reads like a who's who from Astronomy, Popular Astronomy, Astronomy FM, etc etc.  Contributors include Neil Haggath, Mike Frost, John McCue, Rod Hine, Damian Peach (with whose gorgeous photography many readers will be familiar even if they don't know that they know his work), and many others.

Practical, well written, inclusive and classic, it's a worthy successor to a long line of Astronomy Yearbooks.

Personal confession.  Some of my best memories are going out (with a homemade redlight) with my dad to look up at the stars.  He gave me a lifelong love of and joy in learning and an appreciation for physics and astronomy particularly. I'm overjoyed that my dad lived long enough to know that my daughter, his granddaughter has gone on to study astrophysics and pursue a career as an astrophysicist.
I'm very happy and thankful that Pen and Sword picked up the publication for the Astronomy Yearbook and continue to offer it to enthusiasts worldwide.

I would encourage everyone to get outside and look up at our beautiful and amazing night sky.

Disclosure: I received an ARC at no cost from the author/publisher.
at October 28, 2017