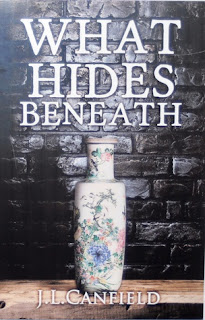 What Hides Beneath is a standalone mystery with romance subplot by J.L. Canfield and Black Rose Writing. A mud encrusted vase is discovered in a box of similarly forgotten items in a storage area under an unspecified Richmond, Virginia museum.  Research including photographs sent to an expert in Japanese artifacts indicate the find to be a priceless 16th century Japanese vase.  A contradictory valuation from Sotheby's appraiser, Annette Williams claims the vase is a 19th century copy, worth a few hundred dollars.  By the next morning, the vase and a plainclothes insurance security guard have disappeared.

The bones of a really well crafted story are here.  The characters are well described, and the plotting is well paced.  The book is 210 pages, so the author has sufficient time to develop the story and characters.  There are, however, some problems.  There are a number of grammar and spelling mistakes, 'poured' instead of 'pored' as well as several dittographies. I received an ARC, so the editing and grammar mistakes might have been corrected before release. Additionally, the place setting has very little to do with the story, which makes the story line seem somewhat untethered.  There is very little background or sense of place.  There are problems with the dialogue which seems forced and unnatural at times.  There is a fair amount of 'telling instead of showing'. All in all, the problems are relatively minor and probably won't detract from the enjoyment of the novel for most readers.

There is very little direct violence or sex; it's a 'clean' mystery and would be suitable for most readers. The violence is mostly psychological.  The murders are not gruesome and I found nothing to be offended over.  I feel the author has a real voice and that the technical problems with the narrative and dialogue are a matter of experience, rewriting and editing.
Three and a half stars.
Disclosure: I received an ARC at no cost from the author/publisher.
at October 08, 2017