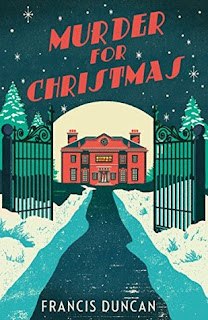 Originally published in 1949, this is a classic golden age English country house murder.  All the boxes are checked off: country house (✓), isolated by nature/weather/etc (✓), eccentric group of characters gathered together (✓), add one amateur sleuth to the mix, then add murder and stir well (✓). This reissue is being released in October by Sourcebooks and was originally written by Francis Duncan, aka William Underhill. There was also a mystery about the original author of the book itself, which is detailed here.

I enjoyed the slightly innocuous sleuth, Mordecai Tremaine, he has a romantic gentle soul.  Others have called him a male Miss Marple, but I would say Miss Marple is a lot more savvy and realistic.  Miss Marple only appears fuzzy and harmless (remember she's called Nemesis several times).  Tremaine really IS a sweetly romantic soul with a secret addiction to romance pulp magazines! :)

The plotting and development are competently delivered and the dialogue and description are very readable (and not very dated), but the secondary characters themselves were, for me, very difficult to keep straight.  I had to keep going back and searching (bless you Kindle search feature!) to find out who was who.  That was a relatively minor irritation, honestly, because the central characters were easy enough to sort out.

Veteran armchair sleuths will likely figure the solution out before the end of the book, but there were motives aplenty and some surprises and twists which I hadn't worked out before the denouement.

Golden age mysteries (especially locked room, and/or country house mysteries) are a special favorite of mine and this one is solid.  I will absolutely be checking out any future offerings from this publisher and author, who apparently wrote at least 20 books, several of which feature amateur sleuth Tremaine.

Disclosure: I received an ARC at no cost from the author/publisher