Holy Crap! The World is Ending 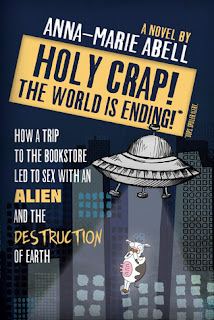 It doesn't often happen that a book makes me visibly react. This was my morning bus commute book over a work week. It made me giggle and snort out loud (not terribly professional) as well as sigh and cry just a little bit.

There are back to back genuinely funny bits, liberally peppered with cultural and nerdy references, then * ka-bam* crap gets real. There are a fair few scenes which come on suddenly without preamble and which will offend some readers (concerning rape/murder/etc).

The writing is masterful and rapid fire. It reminded me a lot of Douglas Adams, or Grant/Naylor at the top of their games. Another reviewer was reminded of Shawn of the Dead. That's a fairly apt comparison.

The chapter headings and illustrations are perfectly hilarious and really add to the story.

This was a five star book for me right up until the last chapter. It ended so abruptly, I got reader's whiplash. Yes, I understand that it's the first in a series and the unresolved plot lines will be revisited later, but criminy, it just left me thinking "wait, what"?!

Interestingly enough, there's an afterword with enough conspiracy theory & alien/UFO info to keep the reader bemused for ages.  I did not take the afterword info into consideration when tallying up stars and writing this review. A lot of readers will see the inclusion as an important part of the book and a positive thing.

For readers who are offended by fairly explicit sex or rough language, this book has both.

Four starsDisclosure: I received an ARC at no cost from the author/publisher