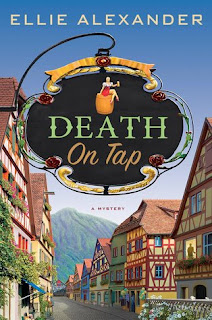 This is the first in a new cozy mystery series by Ellie Alexander about Sloan, a brewer who works in a brewery owned by her in-laws.  Since her husband has taken up with an employee ('the beer wench') and she needs some space to work out her future, she takes a job with a new-to-town brewer.  When a rival brewer is found in one of their brewtanks and her husband is a suspect, Sloan decides to see if she can clear his name.

The main character is also in a crossover standalone story in the other series by this author (Bakeshop mysteries) called Trouble is Brewing.
I really enjoyed the pacing of this mystery, though the actual murder and 'whodunnit' seemed almost incidental to the plot and character development.  I was surprised by the denouement and expected a few more twists, but the writing is very solid and I look forward to the next in the series.

Either the author is a brewer herself or this book is extremely well researched.  I found the background and brewing information really interesting. She's serious about her beer!

Three and a half stars
Disclosure: I received an ARC at no cost from the author/publisher.