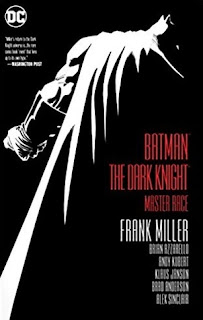 I was pretty disillusioned after TDKSA, so I didn't have very high expectations going into this one.  I really was pleasantly surprised (with a small exception) by this book.  I liked that I was able to follow the plot without any research, since it's been a while since I was caught up with my comic reading,  and I liked the team-up aspects.  I loved seeing the characters which so defined my early life (Atom! Hal!) and reading about them doing what they do best.  I assumed it would be a set up and story arc with an eventual net-zero ending, and that was perfectly ok with me.

I heard a lot of buzz about these books from my 'sister geeks' (i.e. other female gamer/comic nerds) that they hated that FM can't/won't(?) write positive female characters (or that he's a misogynist or whatever).  For my dime, though, I knew going in that it was going to be testosterone soaked and looking for positive female role models wasn't going to happen.

My small(ish) grumble about the book is the hit-or-miss art.  It's so variable that I found myself actually yanked out of the story at several points.

All in all ... enjoyable, especially for someone who isn't a currently super-engaged comics fanatic (I fell out of the habit in grad school, and haven't really ever gotten back into it, since my local comics shop is about 4 hours away *sigh*). I could follow the players without having to resort to looking anything up and the story made sense to me without having to ask for back info.

Three and a half stars from me