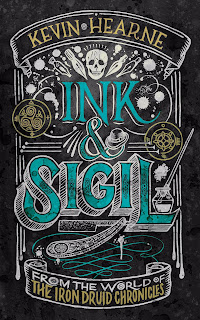 Ink & Sigil is the first book in a new tie-in series by Kevin Hearne. Released 25th Aug 2020 by Penguin Random House on their Del Rey imprint, it's 336 pages and available in hardcover, audio, and ebook formats. It's worth noting that the ebook format has a handy interactive table of contents as well as interactive links. I've really become enamored of ebooks with interactive formats lately.

This is an exuberant Scottish romp and feels like a whiskey soaked script for a supernatural Scooby Doo adventure (including the tricked out van). It's an ensemble cast including a cursed sigil mage, a sarcastic hobgoblin sidekick, a more-than-competent-goth-battle-mage-accountant (who has a sweetly stable relationship), a cabal of international sigil mages keeping the peace over the interplanar beings, some shady government skullduggery, and a librarian for romantic interest.

For fans of Hearne's Iron Druid Chronicles, Atticus (and Oberon) do make an appearance, but it's a very short flashback cameo. Obviously since they're on one another's radars, it's more than likely they'll be showing up in crossovers, but this book stands very well on its own merits, and fans who are looking for Iron Druid won't find him here.

Many of the characters in this book are Scottish and the author has made a herculean attempt to translate the language and accent. It's mostly successful and I didn't have any trouble following (and got more than one chuckle out of the vernacular), but readers unfamiliar with spoken Scottish might find parts of the book slow going. The language is rough, but not egregiously so. There is violence and destruction aplenty (again, used in context). For readers familiar with the author's other work, it's on a similar level (or roughly equivalent to Jim Butcher, Charles Stross, and the like).  I couldn't help but hear the dialogue in my head in the Glaswegian accent as written).

I liked that the main protagonist wasn't a 20something badass. He has to use age and experience to his advantage (along with magic). I like that he has a slight romantic interest who's a late-middle-aged librarian. I liked his egalitarianism, his morality, his kindness, and his pragmatism. I also liked that the book is genuinely funny. It's not often that I am surprised into laughter by reading (smiles, yes, laughter, no). This book actually made me laugh out loud a couple of times.