Monarchs of the Sea: The Extraordinary 500-Million-Year History of Cephalopods 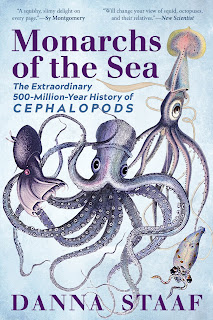 Monarchs of the Sea is a fascinating and factual look at cephalopods past and present by Dr. Danna Staaf. Originally published in 2017 as Squid Empire, this reformat and re-release by The Experiment is due out 15th Sept. 2020. It's 256 pages and will be available in paperback and ebook formats.

There are a handful of popular science and zoology writers who have the gift of writing layman accessibly and interestingly on their topics of expertise. Dr. Staaf is another such. This book is factual, science based, well annotated, but never dry and never devolves into pedantry or pedagoguery. I can imagine that she would be a capable teacher.

It's well laid out and follows a logical format. The introduction includes a very short author bio and some of her background in which I saw my younger self mirrored. She was "the girl with a pet octopus" and I was always the kid with the weird pets (snails, beetles, bees, snakes, etc.) too. The chapters are arranged more or less chronologically, a basic introduction covers some physiology and habitat, followed by the rise of prehistoric cephalopods.

The discussion of early cephalopods includes lots of diagrams explaining the different evolutionary innovations and adaptations which gave advantages to those early species from shells with enclosed air chambers to provide buoyancy, water-jet propulsion movement, and neurological advances. There are, today, four basic groups of cephalopods extant: squid, cuttlefish, octopi, and nautili and the author discusses each in depth both in historical context and more thoroughly in the modern day.

The author also does a good job of realisticailly presenting the conservation challenges of species which have lived hundreds and hundreds of millions of years and are now facing catastrophic losses because of climate change, pollution, loss of habitat, and other man made problems. The book is exhaustively annotated, providing rich resources for further reading.

For readers who have Rachel Carson, Richard Dawkins, and Stephen Jay Gould on their bookshelves, this will be a fascinating read. Four stars.

Disclosure: I received an ARC at no cost from the author/publisher for review purposes
at August 26, 2020

A Witness to Murder (A Lady Eleanor Swift Mystery #3) 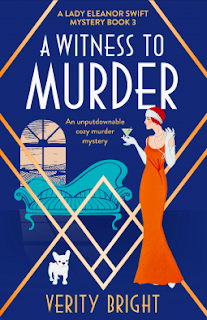