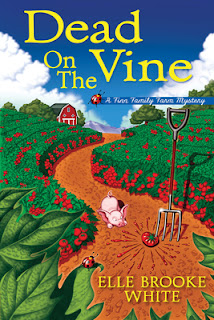 Dead on the Vine is the first Finn Family Farm cozy mystery by Elle Brooke White. Released 7th April 2020 by Crooked Lane, it's 336 pages and available in hardcover, audio, and ebook formats.

This is the first book in a small town whimsical cozy (including a pig and ladybug who "help" solve the crimes. It doesn't go full Rita Mae Brown and narrate from the pig's (and ladybug's) points of view, but it edges pretty close). The city-girl-in-the-country trope is in full force although to the author's credit, the humor at her expense isn't mean spirited or mocking.

Some of the characterizations are vague and a bit two-dimensional. I had some trouble keeping her friends' dialogue clear in my mind as I was reading...they felt a bit tacked on and just showed up and disappeared when their scenes were done.  The action and plot developments were somewhat strongly foreshadowed, so there was never an *aha* denouement.

I was fully expecting the handsome lawman to show up in the first book (setting the stage for the inevitable romance in future books), and I was totally 100% off base. The lawman is a law-woman and proves to be a surprisingly good friend and sounding board to Charlotte as she attempts to unravel the death of a young man on her property as well as the vandalism which threatens to shut down her dream of making a go of her late uncle's farm before it really has a chance to get off the ground.

The writing is uneven, and some of the dialogue is a bit rough, but as a first novel, and series starter, it's engaging and fun and worth a look for fans of very light cozies with anthropomorphic animals. There is no really overt violence (including the main murder) or sexual content and the language is very clean.

Anatomy Made Simple for Artists 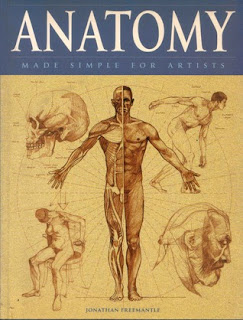