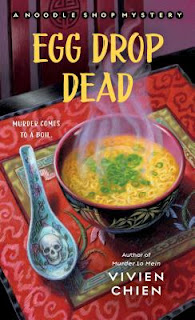 Egg Drop Dead is the 5th Noodle Shop mystery by Vivien Chien. Due out 25th Feb 2020 from Macmillan on their St. Martin's imprint, it's 320 pages and will be available in ebook and paperback formats.

This is a well written and plotted series with appealing characters and a fun cozy vibe. With this, the fifth, book, the returning characters are more fleshed out and three dimensional and main character Lana Lee is a mix of feisty, vulnerable, and sweet. There were admittedly a few places in the story which had me smacking my forehead at her naiveté, but there weren't all that many.

Although it's the 5th book in the series, the author is quite adept at weaving the necessary backstory into the narrative and it works perfectly well as a standalone. I enjoyed finding out more about family friend Donna Feng and her family's shady past. There is nothing triggering or violent (apart from the requisite murders, which are not graphic), and the language is clean (apart from a few mild curse words) and there's no sexual content other than a few chaste kisses.

The plot and revolving characters center around a fictive Chinese shopping area called Asia Village where Lana manages her family's restaurant. The only thing which really required massive amounts of suspension of disbelief for me at this point in the series is the staggering statistical improbability of all these murders happening in the same area with the same extended families and being (mostly) unconnected. I really -love- Chinese cuisine from all areas of China, and I think even I would be wary of eating there. She's like the Asian version of Jessica Fletcher.

Well written and fun. I have enjoyed the series.

The Best of New Orleans Cookbook: 50 Classic Cajun and Creole Recipes from the Big Easy 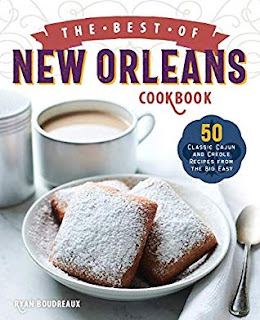